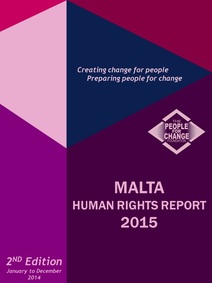 The year 2014 was marked by the introduction of the Civil Unions Bill, giving civil unions between same-sex partners the same status as marriage in all but name. It also provided scope for cautious optimism with consultations on various human rights issues including proposals for the setting up of a human rights and equality commission and adopting an integration policy, commitments on ending child detention and proposed legislation to improve the asylum system and provide greater protection for trafficked persons and other victims of crime.  Improvements were also made in the legal framework around children’s rights including the raising of the age of criminal responsibility and criminalization of female genital mutilation. 2014 also saw a number of changing dynamics in migration, including a decline in the number of boat arrivals but an increase in the number of asylum applicants arriving through legal channels.

However 2014 saw the death of over 3000 people crossing from Libya to the Mediterranean and the end of the Italian mare nostrum mission to save lives at sea. Malta’ detention policy continued to come under criticism both at the national and international level with the Valenzia reporting highlighting a number of serious shortcomings in the policy and practice of detention in Malta and riots in detention highlighting these concerns further. Allegations of human trafficking of Chinese and Vietnamese nationals were investigated with regards to Leisure Clothing Ltd.  Racism and intolerance continued to impact ethnic minorities’ live s with many instances of racism and discrimination going unreported.

Through this update, PfC strives to identify the human rights challenges and failures in Malta as well as to promote positive developments in order to encourage positive change both at governmental level through policy changes but also in and through societal attitudes.

Timeline of Main Events for 2014